AN INTIMATE EVENING WITH DAVID FOSTER 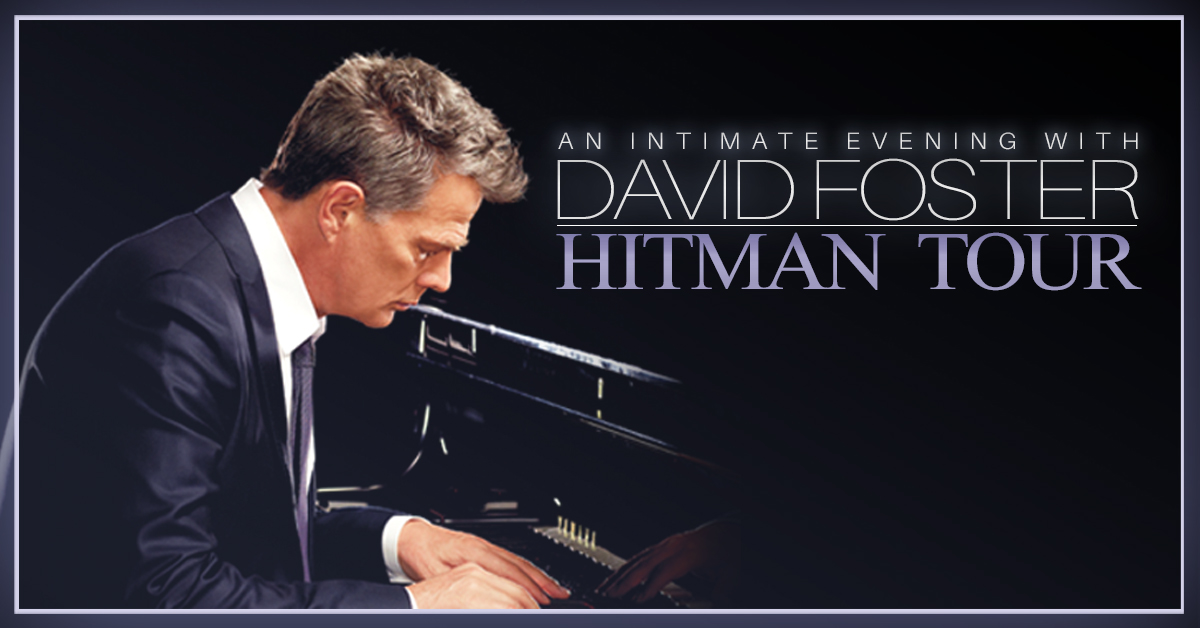 AN INTIMATE EVENING WITH DAVID FOSTER

“I believe that everyone gets three rounds in their life,” says musician, songwriter, composer, arranger, producer, and recording artist David Foster. “For me, two are completed and I’m on to Round Three. I think you have to change it up every round. My mantra is retreat and attack in another direction, which I’ve done twice. Now I’m going to do it again.”

Foster’s first round was as a studio musician, arranger, and recording artist. His second round was becoming one of the most successful songwriters and record producers in history — shepherding albums that have collectively sold in the hundreds of millions. This period of his four-decade career also found him creating The David Foster Foundation and volunteering his time and talent to over 400 charities, as well as becoming a household name as a performer throughout Asia where he tours annually.

For his third round, Foster is gearing up to take on Broadway with several projects. These include writing the music for a new musical about the iconic, animated character Betty Boop, which will be directed by Tony Award-winner Jerry Mitchell.

As one of the most illustrious composers of our time, Foster’s skill set of creating hits, writing indelible melodies, and building dramatic moments, has primed him for this third round. “I think Broadway and I are a perfect fit,” he says. “The story becomes the co-writer. It’s a new adventure and creative outlet for me that I’ve always believed I could do and now it’s become a reality. It’s also exciting because, as a producer, I’ve spent 35 years in a room with no windows, churning out music. Now I plan to immerse myself in New York theater culture and learn the ropes slowly, and I’m not afraid of that.”

For his remarkable work, Foster has won 16 Grammy Awards, including three for Producer of the Year, an Emmy Award, a Golden Globe, and racked up three Oscar nominations for “Best Original Song.” He has also earned a reputation as a keen spotter of new talent, playing a key role in the discovery and career launches of Celine Dion, Josh Groban, and Michael Bublé.

In 2008 and 2011, Foster stepped out as performer in his own right as the host of “Foster & Friends” — two star-studded concert events in Las Vegas that celebrate the music from Foster’s unparalleled catalog. The shows were filmed for Great Performance on PBS and Foster’s Hit Man and The Hit Man Returns became PBS’ highest-rated pledge drive shows of the decade. Foster is also a household name as a performer throughout Asia where he fills arenas on his frequent tours.

In 2015, Foster became a celebrity judge on the smash hit TV show Asia’s Got Talent. Billed as the biggest TV show in the world, it is broadcast throughout Asia into 20 countries and just completed his third season. In 2019, he became the anchor judge on World’s Got Talent in China – the first international entertainer to hold a major TV position in China. The show airs on Friday nights primetime to 150 million viewers. Foster is the Global Grand Brand Ambassador for AirAsia.

“In Asia, audiences believe that the person who writes and produces the songs is as important as the person who sings them,” Foster says. “So when you play a song that you’ve written and the entire 10,000-seat arena sings every word, that’s pretty thrilling.”

An official feature documentary on his career and life debuted at the Toronto International Film Festival (TIFF) September 2019 and was released on Netflix worldwide. David Foster: “Off The Record” is an up close and personal look at the extraordinary career of a producer, composer, and entertainer who has helped sell more than a half billion records working with some of the most successful artists of all time. Powerful and sometimes humorous, the film follows Foster’s relentless ambition, hunger, and rise to the top, as he becomes an iconic producer and songwriter.

In 2020, Foster released a simple yet complex piano solo album, Eleven Words. While Foster is primarily known for writing and producing huge, chart-topping hits for megastars, David steps back to his roots, seated at the grand piano and delivers emotional and meaningful piano melodies.

In his own words, Foster talks about his lifelong passion of the piano. “A lifelong passion began for me as a child sitting at the piano. Never could I have imagined that a kid’s passion of playing melodies at the piano, would lead me to where I am today. From a very young age, I was always drawn to the piano. I can’t think of any other instrument that captures and touches so many different emotions. It is the entire range of the orchestra at your fingertips. It was so cool, fun and even therapeutic just sitting at the piano and creating these melodies – this is me in my truest form and the piano has always been my go-to place. What I truly wanted to do with this album, is strip away the lyrics and all the production that I’m known for, leaving just the melodies….”

It’s not surprising that Foster became a consummate performer. Born in Victoria, British Columbia, he began studying piano at age four. As the story goes, his mother was dusting the family piano, hit one of the keys, and was shocked when David correctly called out, “That’s an E!”, thus discovering he had perfect pitch. The son of a maintenance yard superintendent and a homemaker, Foster has chronicled his life in the highly regarded, best-selling autobiography Hit Man.

Foster has made charitable work his life’s other priority. Meeting with a young girl from his hometown who was awaiting a liver transplant had a profound impact and led him to create The David Foster Foundation in 1986. Its mission is to provide financial support to Canadian families with children in need of live-saving organ transplants, along with a focus on organ donor awareness in both Canada and the United States. Four years ago, the Foundation had a mandate to raise $30 million for an endowment. “We’ve moved that goalpost to $50 million and I think we’ll get there within the next two years” Foster says.
He has also volunteered his time and talent to over 400 charities over the past two decades, including the annual Muhammad Ali Celebrity Fight Night, The Andre Agassi Foundation, and Carousel of Hope. Tapping into his vast network of friends and superstar artists, Foster has enabled these events to raise millions of dollars for worthy causes. “The gift of music has brought me many rewards,” he says. “What better way to honor those gifts than to pay it forward. It’s not just a responsibility, it’s a must.”

Foster has also been rewarded with professional honors, including being inducted into the Canadian Walk of Fame in 2002, The Canadian Music Hall of Fame in 2007, The Canadian Songwriters Hall of Fame in 2010, and the Songwriters Hall Of Fame in the U.S., also in 2010. In 2013, Foster received his star on The Hollywood Walk of Fame. It is located on Vine Street in front of the iconic Capitol Records building, adjacent to the stars of his musical heroes —John, Paul, George and Ringo — a thrill for the self-described “biggest Beatles fan on the planet.” The location is doubly meaningful as Capitol was the label that signed Foster’s band Skylark in 1971. Their hit “Wildflower” became a Top 10 hit and launched Foster on his unending road to success.

Reflecting upon receiving a star on the Walk of Fame, Foster says, “One hundred years from now, my great-grandchildren will go, ‘Hey, there’s my great-grandpa,’ and having a star next to The Beatles … outside the building where I first got signed … that’s perfect.”

David Foster’s October 12 performance has been rescheduled to Wednesday, May 11, 2022 at 7:30 PM.  Hang onto your tickets as they will be valid for the new date.

Please see a message from the artist’s management:

“Due to the nationwide spike in COVID-19, we decided to reschedule the October 2021 concert dates. We are grateful for your patience and understanding.  This decision was made with everyone’s safety in mind. David and his team cannot wait to bring this show to you!”

If you have questions or would like information on ticketing options, please contact The Palace Theatre Box Office at 724-836-8000 or boxoffice@wctrust.net BY 5 PM FRIDAY, OCTOBER 1, 2021. If we do not hear from you by this date, your tickets will remain valid for the amended show date.