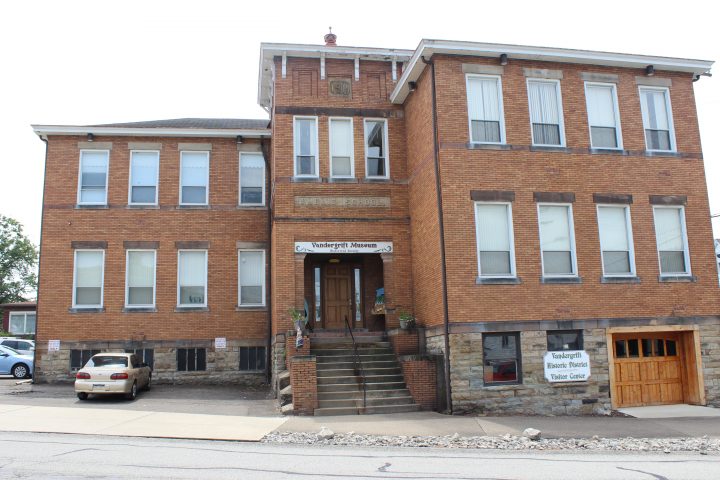 Vandergrift, PA was founded in 1895 by George G. McMurtry, President of the Apollo Iron & Steel Co. He needed to build a new mill and wanted to make a “workingman’s paradise” to serve the workers that would be employed there. He engaged the firm of Frederick Law Olmsted to design the town, which led to gently curving streets with green spaces interspersed to bring nature closer to the citizens. The entire town was laid out, streets were paved, sidewalks laid, water, sewerage and street lights were installed before a single lot was sold. McMurtry funded three churches and the Casino, a community center and vaudeville theater and the showplace of the town. A foundry was built to provide equipment for the mill. Vandergrift was one of the first planned industrial communities in the United States. With all the amenities in place, Vandergrift was vastly different from any mill town in Western Pennsylvania, in fact, in 1905 the design of the town won a gold medal at the St. Louis World’s Fair.

The winding streets and parks remain today, as well as many of the stately homes that were built at the turn of the century. The mill is now a part of ATI, and continues to employ local people, as does the foundry, although they no longer cast there. The Casino building is still used for live theater performances and concerts and is home to the local library. The downtown is on the National Register of Historic Places, and St. Gertrude Roman Catholic Church is on the registry individually as well.

The Victorian Vandergrift Museum & Historical Society was organized in 1990. A non-profit corporation, it is devoted to preserving the history of Vandergrift and its “suburbs”, East, North and West Vandergrift. The society is housed in the old Sherman school, built in 1911. Our collection focuses on Vandergrift businesses, the mill and life in the town throughout the years. We also have the George Nasser Memorial Library, which features a genealogy collection that covers Westmoreland and Armstrong counties and contains many useful references for family historians. In addition the Goldstrom Memorial Hall next door to the museum showcases the Veterans’ Memorial Hall, a collection of military item related to our area. Churches of the area are also highlighted here, as the building was formerly the Free Gospel Missionary Society.